Amsterdam is one of the cities that fill you up with positive energy. It’s not too big, so it doesn’t overwhelm you like the megalopolis do, but there’s so much happening that, as I learned during my 3 months stay, there’s no way you will ever ever ever get bored.

Amsterdam is for sure a unique city, regarding architecture, urban planning but also traditions and culture, but it’s similar to other European cities in multiple ways. When most of the European capital cities were created, hundreds of years ago, their streets were designed so that people were able to walk, ride their horses or drive their carriages. There were no cars back then.

We lead more modern lives nowadays, but it’s nice to try and keep intact the atmosphere of an historical city. I often recommend using the bike while in a European city, as it’s the simplest way to get around, without spending too much time in traffic or searching for the best parking spot.

When it comes to riding a bike, which city do you firstly think of, if not Amsterdam? There’s something about pedaling on those tiny canal sides, while heading to work or simply sightseeing. I had a great time in Amsterdam, and without any doubt, cycling added some good extra points to it! 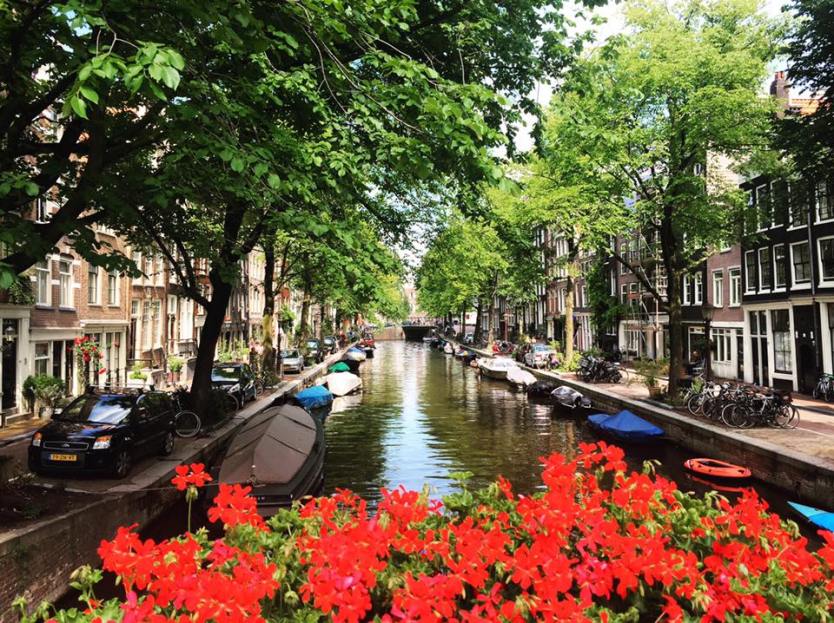 Riding a bike in Amsterdam is a truly unique experience! But in order to understand Holland’s bike culture, you need to know some basic facts about it.

Numbers always tell it better, so just think of a city of less than 800.000 inhabitants and about 900.000 bikes (four times the number of cars!) – yep, true, more bikes than humans.

One important detail is that about 60 years ago, when cars started to become affordable, the streets no longer belonged to the people who lived there, but to the huge traffic flows. Many accidents took place and the Dutch government reacted quickly: they had to choose between making it bike friendly or car friendly – the streets were too narrow, there was no space for both. This was going to be a historical choice, and it was going to have a huge impact on peoples’ lifestyle. They chose the bikes, and what a great choice!

As a result, Dutch people nowadays ride their bike almost everywhere. They go to work daily, they do grocery shopping, take their kids to kindergarten – all by bike. It’s important to have that in mind if you’d like to ride a bike in Amsterdam.

2) Where do you get the bike from

There are more options, regarding your stay length.

If you are planning a short trip to Amsterdam, let’s say up to two weeks, you can rent it. There are several rental companies (Black Bikes, King Bikes, Discount Bike Rentals) with similar prices and services. (around 10€/day). Some hotels (Aalborg Hotel) have their own bikes you can rent, which makes it a bit easier.

If you stay for a longer period, for example you make a school exchange or a summer internship there (like I did), it’s better to consider buying one. You can find plenty, literally plenty of bikes for sale on Facebook pages (Bikes for sale Amsterdam etc.). You can also buy them from people on the street – once a guy just came to us asking if we wanted to buy his bike for 20€ (of course that’s a more unpredictable and uncertain option).

Another thing, don’t spend too much on your bike, just don’t! Bikes in Amsterdam come and go – they get stolen, sold, bought and stolen again. You just need something to get you to that traditional brewery faster, nothing else!

3) What kind of bike should you rent/buy

One thing probably no one tells you about is that there are a lot of slopes in Amsterdam. If you liked geography during high school, you’d know it’s situated on a rather lowland area – true. But no one told you about the bridges! Small, narrow, long ones, almost all of them are considerably steep. You should know that before you choose your bike (if you have what to choose from), and I would recommend having at least 3 gears.

Another important thing is the brakes. Usually, Dutch people have pedal brake bikes, which could be difficult for you to get used to. The safest choice (especially if you stay only a few days and you don’t have time to get accustomed) would be a hand brake bicycle, but it might be a bit more expensive.

To tell it frankly, unless there’s a ‘no bike park’ sign, you can park it anywhere. You will need a good chain though. Sometimes you can spend more on the chain than on the bike itself, but believe me, it’s worth it. I would say an average of 10-20€ would do, and there’s also the Action shop with some cheap bike (and other) stuff.

There are some simple rules that are really easy to follow, as while driving your car of just walking on the street – most of them are common sense, but so important to follow.

Hand signals – whenever you turn left or right.

Priority to the right – whoever comes from your right side has the right to pass firstly.

The correct lane – if you want to turn right, stay on the right lane, if you go left, chose the left one; just like driving the car.

Red light – red light means wait, green light means go. It’s dead simple. There will be so much stuff going on in your head, you don’t want crossing the street on red light be one of them, believe me!

The bell – use it whenever you want to avoid a danger! Get used to their sound, other people might use it to warn you!

Unwritten rule of the very crowded streets – just get off your bike and walk! Red light district during the evening is one example, but you will get to discover many others. Just walk – or better, avoid them if you are in a rush.

6) What to do in case of emergency

It’s most likely and desirable not to happen, but what if it does? Usually it’s just a finger scratch or a knee bruise, and as Dutch people are really friendly and kind, an apology would do. If you got hurt and you are alone, don’t panic! In the Netherlands, the emergency number is 112, and they do come in a blink of an eye. If you hurt someone really bad, call 112 and while waiting, try to talk to the person; if they are looking like losing consciousness, try to keep them awake. There are some first aid pieces of advice that everyone should know, here.

As I already mentioned, riding a bike in Amsterdam is a truly amazing experience! I could even say it is life changing. Make the best of it!